August 13, 2018 — A GM air conditioning class-action lawsuit accuses the automaker of manufacturing and selling a line of trucks and SUVs with air conditioners that stop working.

According to the lawsuit, more than 2 million trucks and SUVs in the U.S. share the same air conditioning designs and were built on a vehicle platform known as GMT K2XX.

One of the plaintiffs says he purchased a new 2014 Chevrolet Silverado 1500 LTZ from a Chevy dealer in Florida, and living in Florida means Manning needed a truck with a good working air conditioner.

The plaintiff, Steve Manning, claims the air conditioner stopped blowing cold air in March 2017 when the truck had about 50,000 miles on the odometer. He took the Silverado to a GM dealer and technicians said the problem was caused by leaks from the low-pressure condenser hose and the condenser.

Manning says the dealer charged $154.00 for the diagnosis and quoted the repair cost at $1367.17 to use GM parts. However, the dealer allegedly said it couldn't get the parts anytime soon, but repairs could be made with non-GM certified parts for $1663.75. Choosing this route would mean a wait of three months, something the plaintiff didn't want to do in the Florida heat.

Manning says he did research online and discovered GM had allegedly been having a lot of problems with the air conditioning in its vehicles. He also learned GM had created a special bracket (part# 23264893) to prevent failures of the low-pressure condenser hose.

Manning says he found a non-GM part and made the repair himself but paid about $500 to $600 for parts and tools, plus another $150 to recharge the air conditioning system.

The lawsuit alleges the plaintiff checked out pickup trucks from Ford and Toyota before he purchased the Chevy Silverado and knowing what he knows now he would not have bought the Silverado if GM would have warned him about the air conditioner failures.

Air conditioners work only when the systems are properly sealed to prevent refrigerant from escaping because even a tiny leak will prevent the evaporators from cooling down and sending cold air into the cabins where the occupants are riding. In addition, other system components are at risk of failing or seizing if the refrigerant leaks out.

Vehicle condensers are used as heat exchangers where refrigerant enters the condenser hot and is cooled there, but GM further says the condenser functions as a “combination transmission fluid/oil and AC condenser cooler.” This means the condenser has multiple lines running into and out of it that carry different fluids at different temperatures.

The class-action alleges there are at least two defective components that cause the air conditioners to fail. First is the line leading from the compressor to the condenser, which is really just an aluminum tube connected to a rubber hose. The plaintiffs claim the aluminum tube can disconnect from the rubber hose and allow refrigerant to leak out.

GM allegedly no longer manufactures the compressor to condenser line originally used in the vehicles because technical service bulletin (TSB) PIT5331 tells GM technicians to replace the line with a newly designed tube. Additionally, dealers were told in the 2014 TSB to install a bracket to minimize the flexing and movement of the line.

However, owners need to pay for this work if technicians perform repairs after the warranties expire.

The plaintiffs claim documents from General Motors prove the automaker knew about the air conditioner defects beginning from the time GM sold the vehicles. The 2014 TSB references “the compressor to condenser line” and notes “[s]ome owners may comment that the a/c is blowing warm.”

General Motors goes on to write: 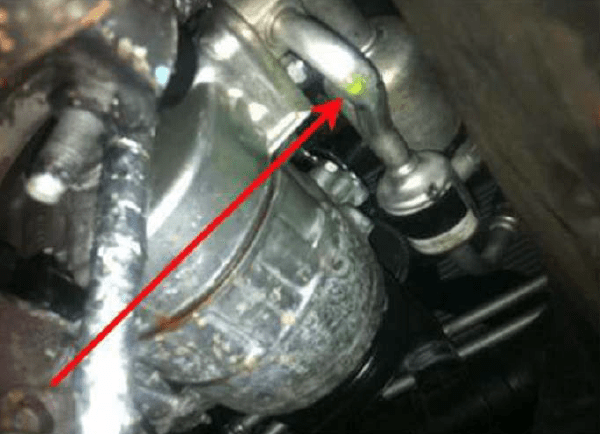 "If the a/c line cracks, it may spray oil and refrigerant onto the a/c compressor, making the leak very hard to identify. To repair this condition and prevent it from reoccurring, replace the compressor to condenser line and install the line bracket shown below. After completing the repairs, recharge the refrigerant system and perform a leak test to verify proper operation."

The plaintiffs claim the TSB was issued to dealers because of a large number of complaints, then in May 2015 General Motors issued bulletin PIE0340, “A/C Inoperative or Poor Performance on Recent Built Vehicles.” The bulletin concerns 2015 models and how “Some customers may comment on the A/C not performing as intended or the A/C not performing at all.”

According to the plaintiffs, this is further proof GM knew about the defective air conditioners before the vehicles were even on dealer lots.

The plaintiffs claim the condensers can't handle normal operations, something GM took note of in November 2017 when the automaker mailed notices to owners. However, the lawsuit alleges only certain customers were mailed the notices that said the vehicles:

“...may have a condition where thermal cycling on the combination transmission fluid/oil and AC condenser cooler creates a crack that may allow refrigerant to escape. This condition consequently may deactivate the AC system….”

The plaintiffs are represented by the Hickey Law Firm, P.A., the Law Office of Richard Schechter PC, Reich & Binstock LLP, and the Law Offices of Ernest Bo Hopmann III.