January 13, 2019 — A Fiat Chrysler EcoDiesel lawsuit doesn't include vehicle buybacks but does offer cash reimbursements, extended warranties and repairs to the emission systems.

The class-action was prosecuted at the same time government settlements were negotiated to ensure the vehicles are brought within legal emissions standards and to compensate EcoDiesel customers.

Eligible customers also include those who between January 12, 2017, and the claim submission deadline become the owner or lessee of an eligible truck or SUV.

FCA has also agreed to pay an estimated $307.5 million to affected customers, with that amount reached if all customers participate in the claims program.

Former owners, lessees and former lessees are all eligible to receive $990 each. 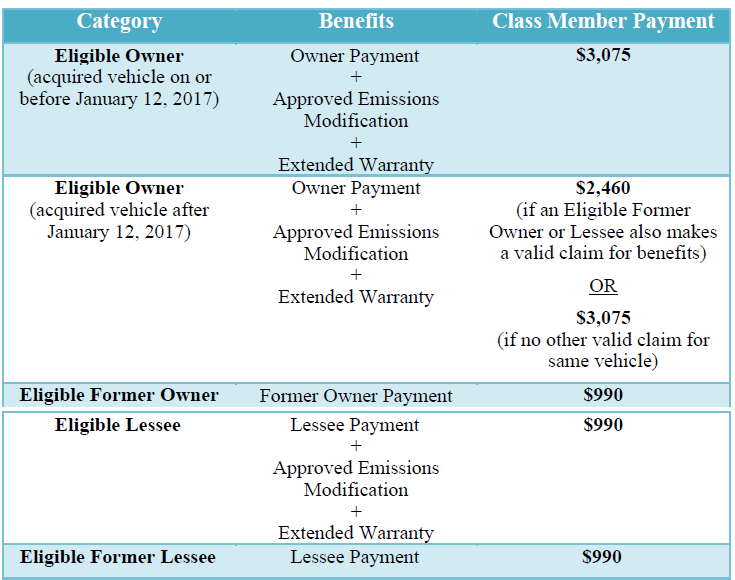 The EcoDiesel extended warranty covers the cost of all parts and labor necessary to repair these items.

The EcoDiesel settlements estimate the extended warranty will cost Chrysler more than $105 million and will likely be approved following a scheduled hearing for preliminary settlement approval on January 23, 2019.

Lawyers for the plaintiffs will receive up to $66 million.

The case is: In Re Chrysler-Dodge-Jeep Ecodiesel Marketing, Sales Practices, And Products Liability Litigation.

Ram and Jeep customers may learn more by visiting EcoDieselSettlement.info.